How do superheroes celebrate the holidays? Our new section, “There’s no place like Marvel for the holidays” is going to tell you! We are counting down some of our favorite moments from the Marvel universe that surround a certain holiday.

In many households across the United States watching the Macy’s Thanksgiving Day Parade a tradition. Spider Man first appeared in balloon form in 1987, the same year as this amazing float. The Marvel Comics Parade Float, which I found thanks to ComicBook.com, is a superhero spectacular that could only come out of the 80’s. It features Dr. Strange, Captain America, Wolverine and Power Man(?) fighting against The Entrantress, Dr. Doom, Green Goblin, and the Hulk (hey what’s he doing as a bad guy??) Basically it’s the first draft of Captain America: Civil War with all of the camp you would expect from one of Cap’s USO performances. 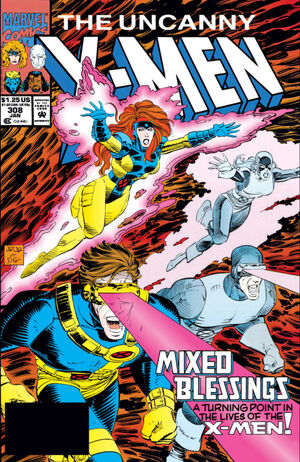 This issue of X-Men has everything you need for a good holiday: a proposal (by Jean!), a football game, and a turkey dinner. In a truly squee-worthy fashion, Jean Grey and Cyclops share memories of their romance while strolling around the grounds of Xavier’s. They run into numerous mutants along the way all relaxing after a long, hard year. It is a pretty perfect way to show what really matters to these characters as well as establish the X-Men as a family, no matter how divided or beatdown at times.

One of the best things to come out of the original Spider-Man trilogy was Willem Dafoe as Norman Osborn/The Green Goblin. On Thanksgiving he is at his best, whether making joking quips about his job (as a villain), getting reprimanded by Aunt May for sampling the food or menacingly sharpening knives.

It’s also the moment, he realizes Peter, his son’s best friend, is Spider-Man aka his worst enemy. The scene makes it hard to see the Goblin as a purely evil villain because you can tell how conflicted he really is and how much this revelation upsets him.

Did we miss any of your favorites? Let us know. And Happy Thanksgiving!